Friends, Romans, countrymen, lend us your ears... for some new Julius Caesars have been crowned at Carmel High School this year! 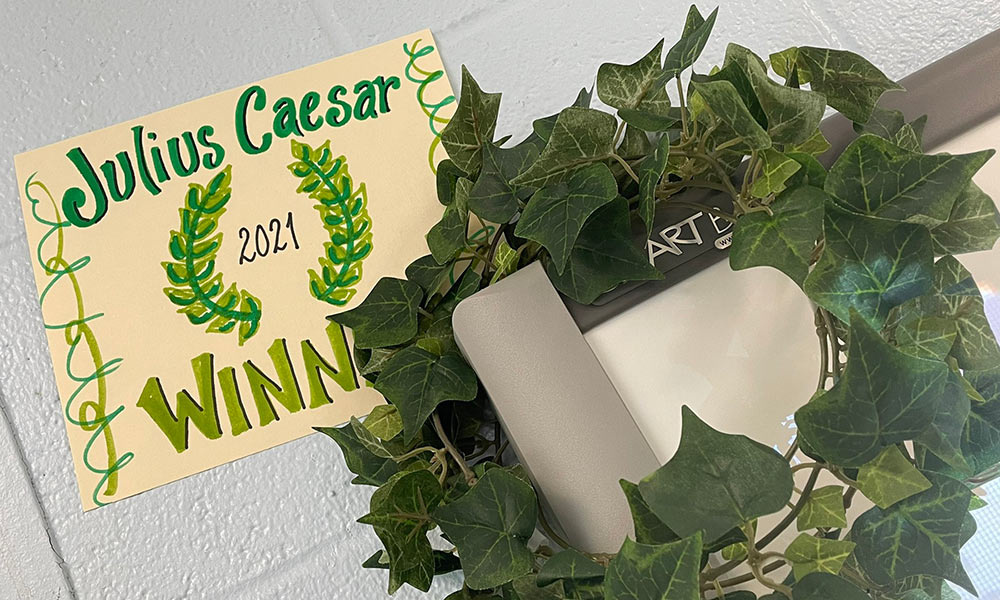 This 18-year-old tradition began with English Department Chair Linda Press using a short story, “The Palace Thief,” as a lead into her lesson on Shakespeare’s Julius Caesar with her English 10 class. The short story centers around a prestigious boy’s school that hosts a Mr. Julius Caesar contest each year, featuring questions based on Roman history.

The students asked her if they could host their own contest and an annual tradition was born.

Contestants dress in togas over their clothes and compete to answer trivia questions until there is a last person standing. The lesson is regarded as one of the students’ favorite memories from class.

“The Julius Caesar contest was one of my favorite days of high school ever,” said senior Amanda Hunt, who won the competition during her sophomore year. “I found genuine fun in cramming as much information into my head as I possibly could. Being able to win and get crowned by the year’s previous winners is one moment from high school that will stay with me forever.”

This year’s contest took on a new format in order to include those students who were not physically in the building for classes. Press had students create projects that reflected Roman history, “The Palace Thief” or Julius Caesar. The creative submissions ranged from videos of students reciting soliloquies from Shakespeare, or recreating Caesar's death scene, to a Taylor Swift parody of why Caesar had to die and a podcast in which Caesar, reincarnated as a dog, is interviewed about his life.

“Through the contest the students learn a little more about Roman history than they previously knew, and they learn how to be gracious winners and losers,” said Press. “Students who graduated 15 years ago can still quote from both the short story and Julius Caesar. That is how I know it makes an impact. It’s fun and the students need some fun.”