Earlier this month, students at Carmel High School filled the gymnasium for an important historical lesson. Our students had the opportunity to hear the first-hand perspective of Paul Galan, a Holocaust survivor who was born in Czechoslovakia, and immigrated to the United States in 1951. 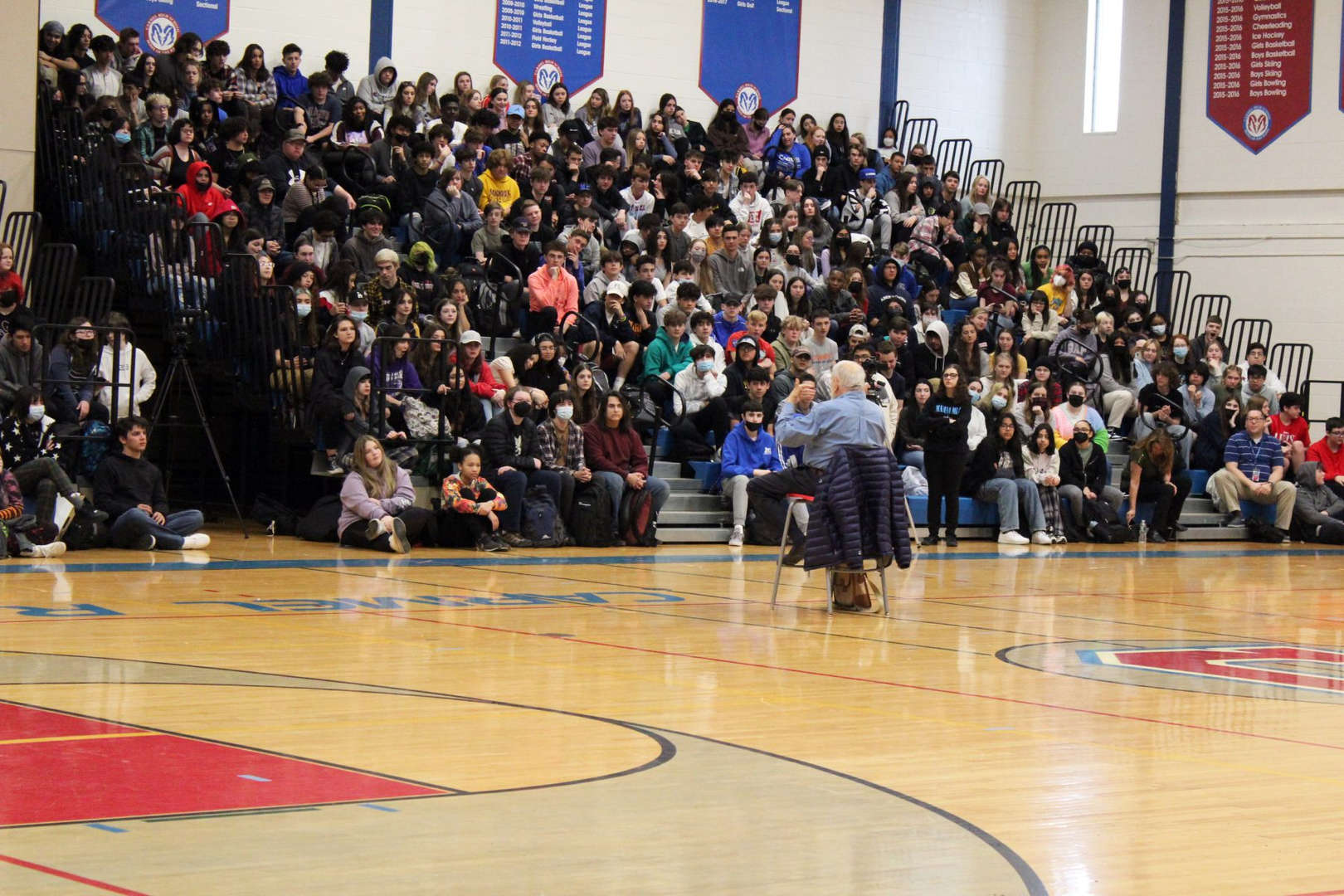 Galan shared his perspective growing up as a young Jewish child with his family in Czechoslovakia in the years leading up to World War II. As antisemitism took over, he recalled the hostile and discriminatory treatment his family began to experience in their hometown. As the war broke out, his family was eventually captured, separated, and taken to a labor camp. His presentation detailed their unique story of separation, survival and their miraculous reunion after the war.

During his presentation, Galan made connections between World War II and the current situation with Ukraine and Russia to provide perspective to the students. He noted the stark difference in actions by the Russians then and now.

“What a turn around that it. What an incredible turn by humanity,” said Galan. “There are thousands of people getting killed on both sides today in Ukraine. Russian soldiers are killing Ukrainians and Ukrainians are fighting against them. Who knows how it is going to end. Russians, who fought against the Germans and who liberated Jews in the camps, are today killing people in Ukraine. Just think about that for a moment, how things can turn.”

After immigrating to the United States, Galan had a successful career working in the film industry and as a documentarian. His television work earned him two EMMY nominations, the Robert F. Kennedy Memorial Award in Journalism and numerous other professional industry recognitions. Since his retirement he has dedicated his time to sharing his family’s story to help preserve the memory of the Holocaust for future generations.

“This may be the last generation that will have the opportunity to hear directly from liberators and survivors of the Holocaust,” said Carmel High School Social Studies Teacher Susan Tornatore who helped organize the opportunity for students. “Over the years it has become increasingly difficult to hear from Holocaust survivors as they advance in age or pass on. In the future, it will be the children of survivors who we will look to as our next best resource. Paul offered lessons to our students not only about the past, but the current challenges in the world today as well.”

Galan’s visit continues the high school’s long history of connecting students with individuals who can share personal accounts of historical events. In 2021, students were able to hear from Alan Moskin, a World War II veteran who helped liberate the Gunskirchen concentration camp.

“Your presence here today signifies that this matters to you,” Tornatore said to students gathered to hear Galan speak. “Being here to hear a survivor’s story, that matters, and having opportunities to have these presentations also matters.”