If you ask the average person what the digits of Pi are, you will likely get a three-digit reply: 3.14.

But, if you want any chance of winning the Digits of Pi competition at Carmel High School, you are going to need to add several hundred more numbers to your answer! 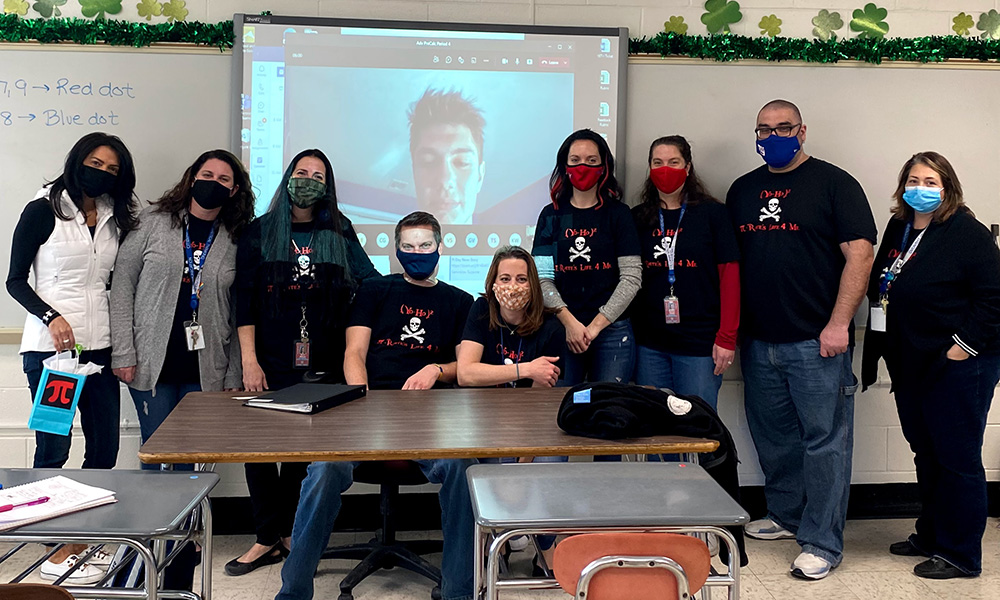 As part of a school-wide Pi Day celebration, math teacher Terez Mekuto sponsors an annual contest open to all students who want to try their hand at memorizing as many digits of Pi as possible. This year’s winner, for the third year in a row, was junior Nicholas DiLeo. DiLeo memorized 1,630 digits this year, filling the digits in across eight sheets of paper – a feat that took Mekuto almost an hour to check and verify.

“I feel relieved that the months of studying finally paid off and I completed the challenge I set for myself,” said DiLeo. “For next year I’m hoping to beat the all-time record, but I have my work cut out for me.”

DiLeo’s 2021 record tops his previous best entries of 500 during his freshman year and 1,220 during his sophomore year. The all-time best record at Carmel High School is held by Christina Gregis who memorized 2,450 digits in 2015.

“It would be cool to have the school record and win the contest for the fourth year in a row,” said DiLeo. “The 2,450 digits is a very big challenge, which makes me want to beat it even more.”

DiLeo begins preparing each year a month or two before the contest and focuses on memorizing the digits in sets of 10. He finds that writing them down repeatedly helps commit them to memory but admits that even taking one day off from practicing can make him lose his momentum. DiLeo finds Mekuto’s passion for the contest motivating and recognizes her support for making his wins possible.

“To me, Nick is superstar for being the contest winner, and he now holds the Carmel High School record for being the first student to win the contest three years, consecutively,” said Mekuto. “I am proud of him. He is proof that if you want to accomplish a goal, you can, if you work hard enough for it.”

For his impressive win, DiLeo was awarded a Pi Day T-shirt and gift card, and will have his win recorded on the plaque in the school and in the annual yearbook.

In addition to the Digits of Pi competition, Mekuto leads the department in a Pi Day themed T-shirt sale which raises money for two scholarships at Carmel High School. The Paul Eckhardt Scholarship is awarded to a senior student who shows excellence in mathematics and the Kathryn Casey Scholarship is awarded to a graduating senior who wants to pursue math education in college. The T-shirt sale typically raises $300-500 each year for the scholarships with 100 to150 T-shirts purchased districtwide.