Bringing the Constitution to Life

Seventh grade students at George Fischer Middle School were transported back 234 years to September 17, 1787, to celebrate the signing of the U.S. Constitution as part of a Constitution Day lesson. 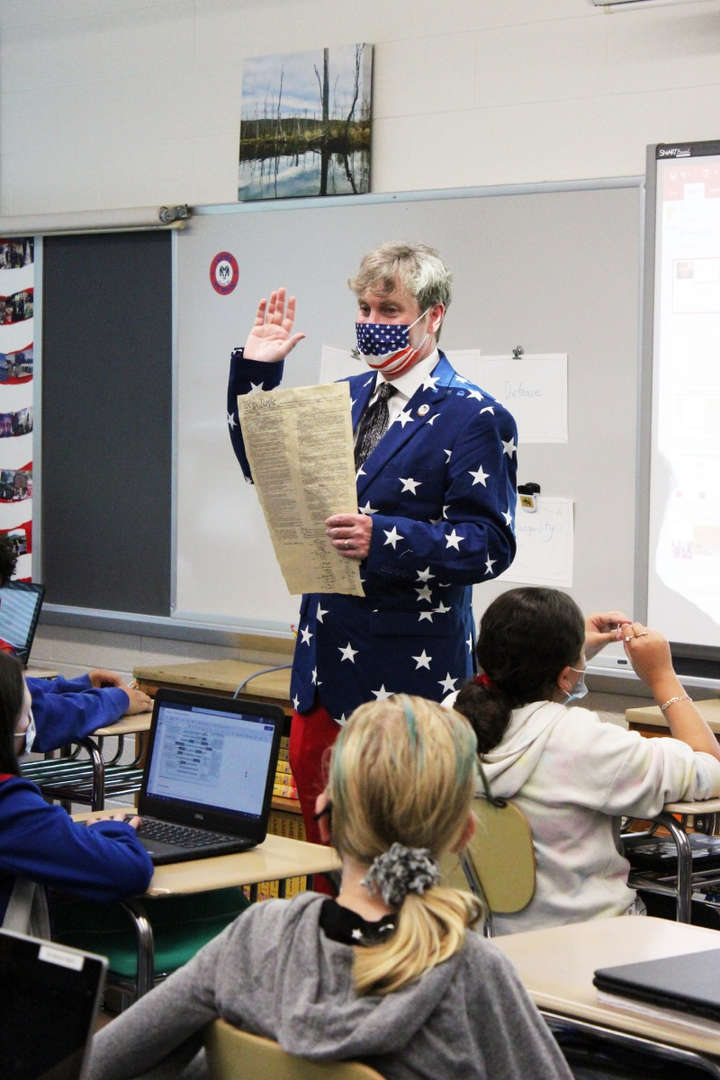 Holding up a copy of the Constitution at the front of the room, Social Studies Teacher Keith Reilly, who was dressed head-to-toe in stars and stripes, opened his lesson by letting his students know that the document in his hands was a mere replica of the Constitution. Of course, the real Constitution was under lock and key in Washington, D.C., despite his requests to borrow it for the day.

So, why is it important to learn about the Constitution?

The Constitution Day lesson provided an opportunity for students to demonstrate civic responsibility and pride – an example of Citizenship, one of the 6C characteristics the District strives to instill in Carmel graduates.

The main topic of the classroom conversation focused on the six goals or values listed in the Preamble for the establishment of the Constitution: Tranquility, Justice, Liberty, Union, Welfare and Defense. These values were displayed individually on the board at the front of the classroom

The students discussed each of these values at length and then Reilly asked them to choose which value they believed was most important and why.

“The most important idea in the Constitution is liberty, I believe,” said student Madeline Letteri. “Liberty means the state of being free within society from oppressive restrictions imposed by authority on one's way of life, behavior, or political views. This means, to me, that we get to choose how we live our life and it’s not other people’s choices.”

“The most important goal in the Constitution is justice,” remarked another student. “Justice is how we establish the rightful punishments and rewards for people.”

Students were then asked to come to the board and put their John Hancock – otherwise known as their signature – on the paper displaying the value that they believed was most important.

Since 2013, Reilly has been keeping a running tally of the votes each value gets from the students during this assignment. Liberty, justice and tranquility have been among the most-chosen values with students over the years.

Despite having been written 234 years ago, the students learned how the Constitution continues to be applicable today as new issues arise in our country. Reilly noted that we, as a country, will always be smoothing out issues, but the main principles that our forefathers established all those years ago still protect us today.

“It’s important to be aware of issues and realize that not everyone is going to accept your idea,” Reilly told the class. “It doesn’t mean you’re wrong. It means that you have to keep talking it out, and be able to listen to other people’s views while being able to promote your views as well.”