Earth Science Classes Get a Lesson in Weather 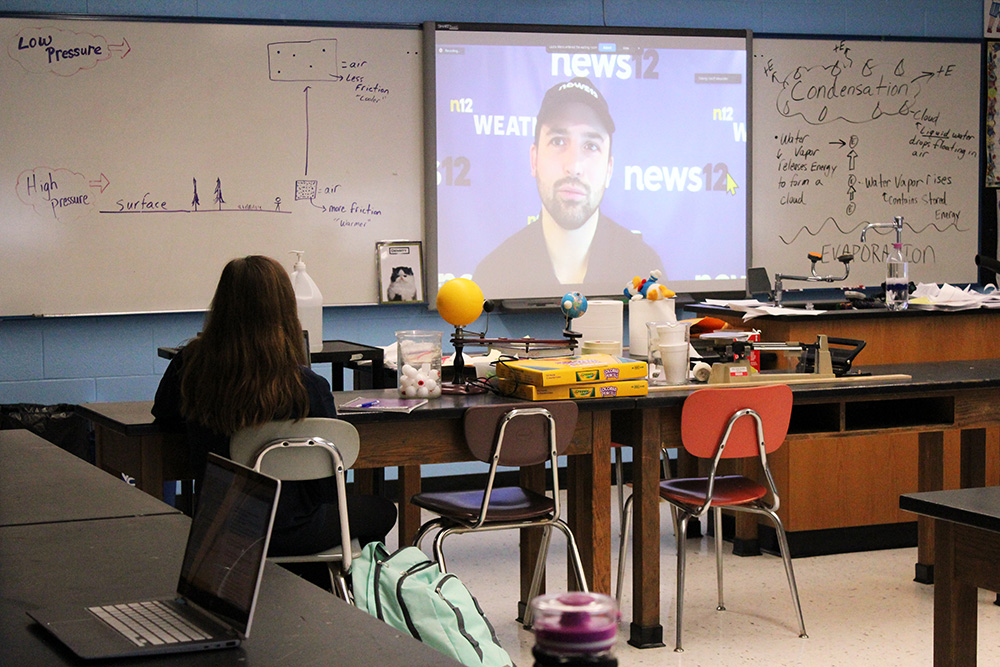 Eighth grade Earth Science students in Dennis Savage’s classes at George Fischer Middle School know the answers to these question thanks to their recent weather unit and special virtual classroom visit by Geoff Bansen, digital/weekend AM meteorologist for News 12 Networks.

Bansen joined the class via Zoom to share his journey in the meteorology field and the path that led to his career – from his college major to his first job. He then fielded questions from students on weather patterns and their causes – including what causes a microburst and if climate change is the cause of some of the more recent weather. Bansen even gave his opinion on how hurricanes get their names!

“It was interesting to learn about both the hard science of meteorology, as well as how meteorologists present their information to the public,” said student Halina White. “It is nice to see how they think about weather versus the average person, in both their words and their emotions!”

“I loved the presentation! Geoff was super nice and was very interactive with my class,” remarked student Keira Telepan. “We learned more about how and why weather forms, and what it's like to be a meteorologist. It was a 10 out of 10 experience and I hope everyone gets a chance to get to meet and talk with him at some point!”

Bansen was impressed by the weather curriculum that the students were working on in Savage’s class, noting that he did not learn some of the topics until he was in college and in his planned major.

One thing that Bansen stressed to the students was the importance of digital literacy in the field – a change of the times and a critical competency for success. In smaller television markets, the production teams are often small or non-existent, so someone in Banson’s role often must make their own weather graphics and do all the digital prep work in addition to being the on-screen talent.

Bansen urged the students to put full effort in all that they do – whether they explore a career in meteorology or any subject they are passionate about.
“Go all out and you will get there!” said Bansen.

“Having Geoff Bansen join our class played an important role in authenticating what students are learning in Earth Science,” said Dennis Savage, eighth grade science teacher. “He brought a sense of reality to the profession and toward the pathway of becoming a meteorologist. He stressed the importance of hard work and dedication for becoming what you want to be in life!”