George Fischer Middle School was the location of two week-long Future Genius summer programs this year, offered as a pilot program to the school’s rising eighth grade students. Students were able to choose from three courses for the week-long program: Beta Masters, which focused on video game design; Eco Genius, which focused on environmental studies; and Team Elektra which focused on digital art for girls. 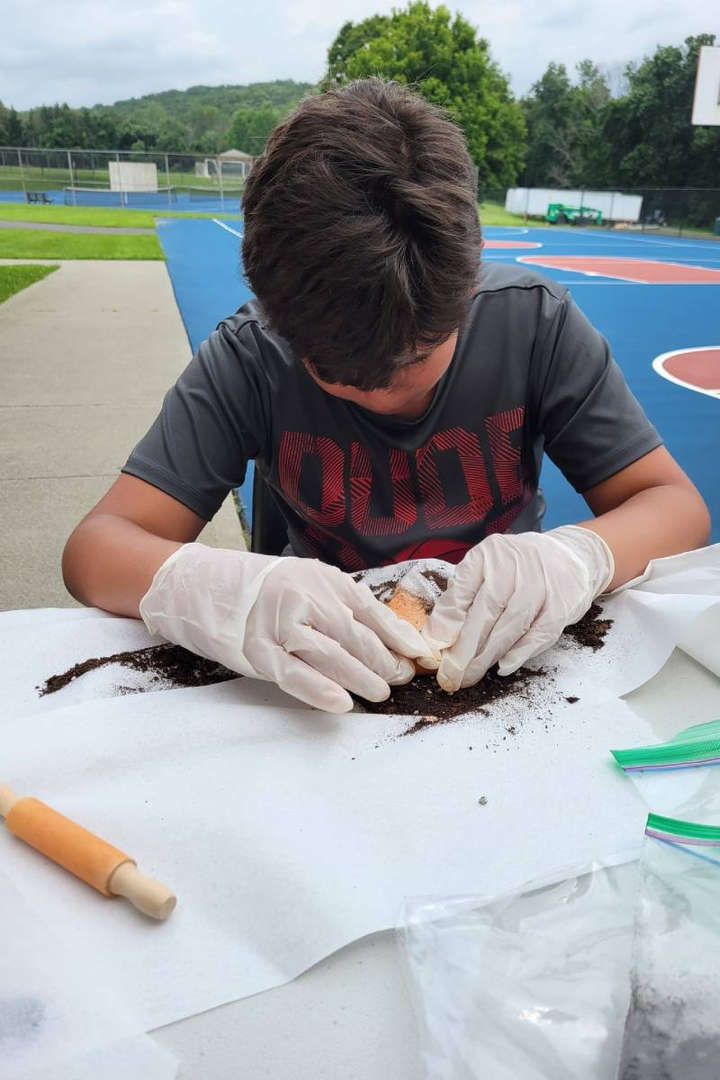 This year’s programs all rallied around a global UN environmental issue, focusing the lessons and activities on environmental sustainability, climate change, animal conservation and more.

Students in the Eco Genius program spent the week studying the human impact on the environment and how to lead a more sustainable daily life. Hands-on activities included creating seed bombs -- a small cluster of wildflower seeds and soil that can be planted – and building replicas of windmills using cups, paper and other household materials. In addition, students researched topics including pollution and sustainable energy, and created infographics and presentations to educate others on what they had learned.

"Teaching Environmental Science and how humans impact their environment is so important for the students to hear,” remarked Tracy Brusie, an earth science teacher at George Fischer Middle School who signed up to teach the Future Genius program. “This is a course that allows the students to see that they, too, have a voice and need to be heard."

The lessons throughout the week helped students create their own action plan in response to real-world issues, which they unveiled to their peers and teachers on the final day of the program.

"I knew how important the climate crisis is but, I had no idea exactly what all of the pieces of the puzzle were,” said student Matt Acevedo, who created a public service announcement video highlighting the crisis of climate change with partner Parker Capolino. “This course taught me that 93% of humans have plastic byproducts in their urine!"

"The Future Genius program does the whole 'project-based learning' thing very well,” said Karissa O’Reilly, library media specialist at Carmel High School, who worked with the Eco Genius program students this summer. “Our students in the Eco Genius class had a goal to convince their peers that climate change is important, and that we can all play a part in helping. Every day our students were researching, learning, doing hands-on activities, and brainstorming solutions to global problems, all while having a great time."

How do video games and environmental conversation intersect? Students who participated in the Beta Masters program learned just that during their week together.

Using video game creation tools like Construct 3 and Piskel, the students learned about user interfaces, production, timing, and graphics – skills necessary to create a working prototype of a video game.

Students came into the week-long program with a wide range of skills. Some students came in with graphic design skills, some with video creation skills and some with background in concepts – but all came with the passion and interest to take their gaming to the next level.

“The platform they are using is Construct 3 to create their game. The idea was for them to use one of the UN’s global goals and to try to integrate that into their game,” said JoAnn Monroe, an English teacher at George Fischer Middle School who co-led the Beta Master student group. “They could either create a game from the ground up or use pre-built templates and modify it with their own graphics, actions and behaviors.”

Students Chris Hidalgo and Matt Vlachos created a game that focused on recycling using a pre-made template based on a popular game called Kiwi’s Adventure:

“I like to recycle water bottles. The game is called Reese Cicle and the character has to collect all of the garbage and turn it into recyclable items,” said Hidalgo.

In addition to creating actual games, the students learned business skills including how to write a pitch and make a presentation for their faux indie game company. At the end of the week the working teams presented their games to guest judges from the District in an attempt to get investors for their faux company. The judges made their investments based on which game has the most potential to come to market.