Armed with a computer, a Microsoft Teams meeting and a document camera, George Fischer Middle School art teacher Sandra Swarm used the remote-learning schedule in December to teach her seventh and eighth grade students a lesson on perspective. 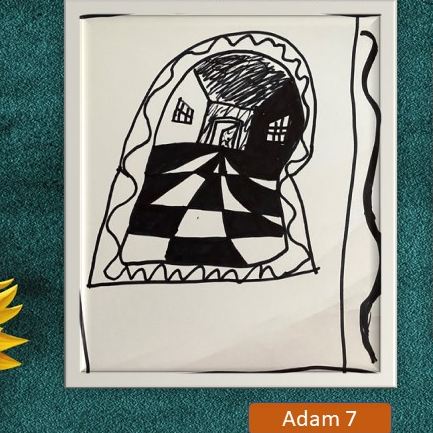 A one-point perspective drawing gives the illusion of space by using one point, called a vanishing point, in the distance and sets everything else around it.

“A vanishing point is the place where your vision stops,” said Jack Roberts, an eighth-grade student in Swarm’s class. “Everything gets closer as you look further away from the vanishing point.”

For this project, students drew the perspective of looking through a keyhole down a hallway. They were given artistic freedom to decorate the sides of the keyhole and adorn the walls of the hallway in their drawings however they saw fit. Some had windows, some even added curtains, and a few even drew flat screen televisions!

“In my experience, middle school students enjoy learning how to draw things in a more realistic fashion,” said Swarm.

This particular project was completed in December when students were on remote-learning. One major difference between being at home versus the classroom is the availability of supplies.

“We didn’t have the same supplies that we would have in the classroom, but Mrs. Swarm told us different ways to use different materials,” said Sadie Scalzitti, an eighth-grade student. “I learned that if you didn’t have markers or colored pencils that you could use your pencil and shade it by putting different amounts of pressure to make it darker or lighter.”

Swarm knew that supplies could be a challenge when students were home, but that this particular project would work well with what they had.

“Every student has at least a pencil and a piece of paper at home,” said Swarm. “I just said to grab a pencil and paper. If you have a ruler, great. If you don’t, you can use the side of a book. Or, just free-hand the best you can. I don’t want this to impede your process. It’s always about being resourceful.”

Since Swarm was not able to walk around a physical room helping students as they completed the project, she had “Walk Around” time where she had students turn on their cameras one-by-one and show her their work. While a few students were reluctant at first, by the end of the project, they were all ready to show off their unique drawings to the class, virtually!

When recalling a highlight of the project, the students had varying answers from experiences during it to the final outcome.  “I was really interested in drawing tunnels and hallways, and now I know how to draw them!” Jack exclaimed.