It was a typical Monday morning for Kent Elementary second-grade student Gianna Cautillo.

Gianna was chosen as one of Kent Elementary School’s weekly Carmel 6C good behavior winners for last week, an honor that comes with a prize – typically a pencil and a sticker. After hearing her name announced, Gianna headed to Principal Kathryn’s White office to collect her prize but found her schoolmates and teachers lining the hallways cheering her on. 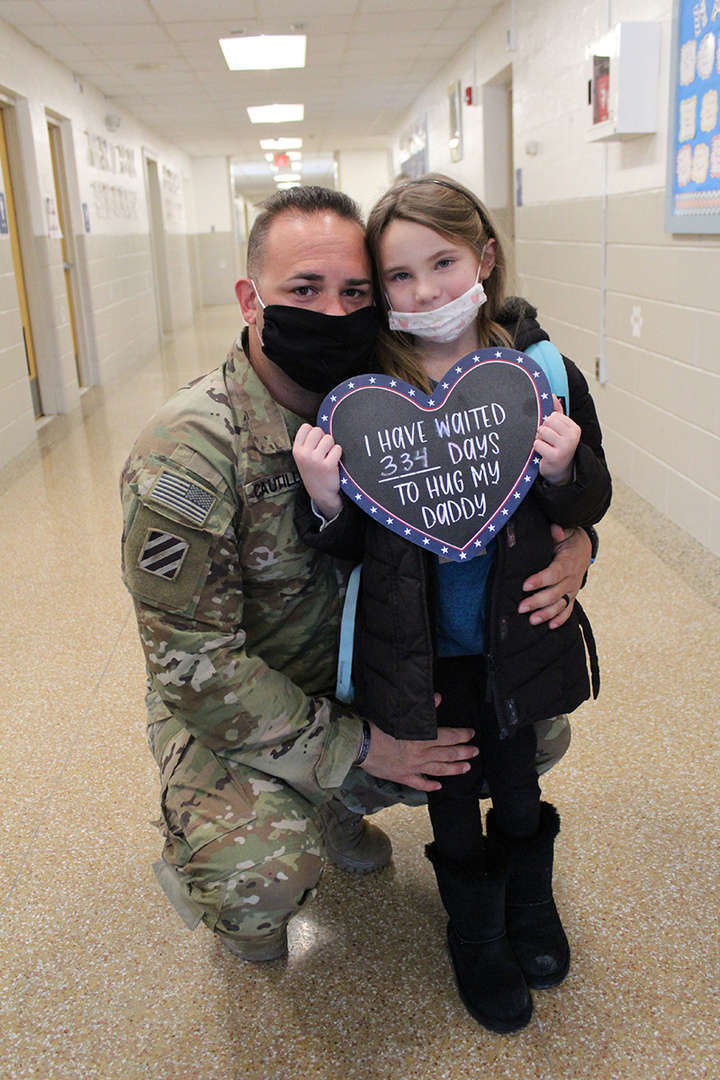 The prize awaiting her in the office: her dad, just returning home from a 10-month military deployment.

When Gianna rounded the corner and spotted her dad at the door to the main office, she took off running, right into his arms for a long-awaited hug.

For the past 10 months, Gianna’s father, Staff Sgt. Alfonso Cautillo, has been serving in the U.S. Army National Guard in Africa. He expected to return home in March around the time of Gianna’s birthday, but a change of plans brought him home two months early. With the help of his wife, Nicole, and the Kent Elementary community, he got the chance to surprise Gianna at school.

Alfonso arrived home Sunday evening but had to wait a few extra hours in order to pull off the best surprise for Gianna.

“I wanted to see her first, but I thought this would be better, surprising her at school,” said Alfonso.

Gianna’s mother, Nicole, played an important role in pulling the surprise together quickly with the help of Kent Elementary staff and students.

“I had a lot of people helping out and distracting her, so it makes it a lot easier when you have a lot of support at home,” she said. “It was a matter of working parts that you have to keep moving around.”

Now that Alfonso is home, the family plans to spend as much time together as possible, playing card games, particularly Uno, and possibly taking a trip to Walt Disney World later this spring – a post-deployment family tradition.

“Every day, me and you. Doing things,” Alfonso told Gianna.

Her response: “Now mommy gets to relax!”

“We were so blessed to have been a part of this,” said Kent Elementary Principal Kathryn White in an email to the Kent Elementary students and families. “God Bless America, our troops and their families, our community, and all of our students here at Kent Elementary School.”