There was a holiday mystery to solve and Jacqueline Zulauf’s fourth-grade students at Matthew Paterson Elementary School were on the case. 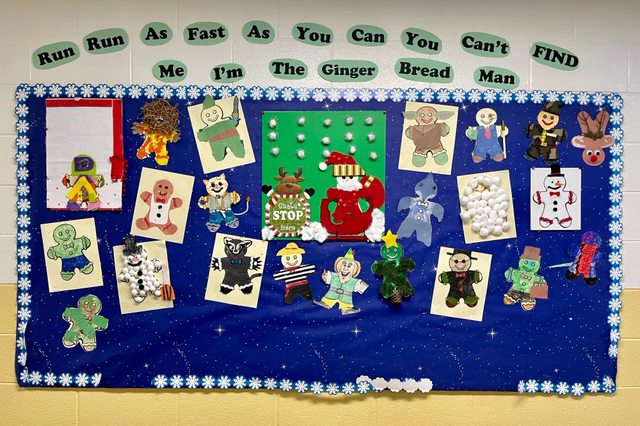 Before the holiday recess, the classroom mascot and friend, Zen Cat, left a note for the students that he took off with the Gingerbread Man on a little vacation. The two said that they are off jet setting and would not be back until next year... but the students made it their mission to bring Zen Cat back to their classroom, nicknamed Zulaufia, before the holiday break.

But, where in the world are Zen Cat and the Gingerbread Man?

During the search, the students received postcards detailing Zen Cat and the Gingerbread man sightings from across the country and marked them on a large classroom map. Postcards came in from Maine, Hawaii and California, among others, and detailed how sneaky and fast Zen Cat and Gingerbread Man were. They even wore disguises to not be noticed.

To help decipher the clues of Zen Cat and Gingerbread Man’s location as they came in, the students read many gingerbread man stories and used their Carmel 6C critical-thinking skills.

They also did some outside-the-box thinking with a drawing assignment that provided them with half of a gingerbread person body and allowed them to imagine it as something else – a dinosaur, a fox and more!

“My favorite part was when we built our gingerbread man disguises,” said student Jack Emhardt. “I disguised him as Baby Yoda because he can blend in and he can use the force to bring Zen Cat back to us!”

"I turned mine into a bunny and I liked it because we could make basically anything we wanted except for a gingerbread man,” said student Heidi Binder. “I picked a bunny because when I turned it around, I saw that the foot looked like a folded down ear.”

“I disguised mine as a dolphin because they had been visiting Maine a lot for Zen Cat to get food,” said student Avery Luciana. "I thought maybe when Gingerbread Man brings Zen Cat to get food, my dolphin could jump out, grab Zen Cat, turn him blue and then bring him back to Patterson. Also, dolphins are my favorite animal."

After all the clue hunting and decoding, Zen Cat and the Gingerbread Man were found ending their holiday in Italy!

Student Tyler Oxee picked up on some early clues that pointed to Zen Cat and the Gingerbread Man planning to head for Italy.

“In the first note we got from Zen Cat it said ‘ciao!’ and I found out that meant goodbye and hello in Italian, so that’s why I thought it would be good to make a gondolier,” said Oxee. Oxee added that he thought a boat was the perfect escape aid if the duo had been caught.

“My gingerbread man could have been helping them for all I know!”