Third-grade students at Matthew Paterson Elementary School may have entered the building in Patterson but ended up a world away at the Annual Third Grade Passport Day World Tour – a school tradition for nearly 30 years.

The third-grade hallway was transformed into a gateway to the world, with colorful decorations and passport stations outside each of the four classrooms, welcoming visitors to different continents. 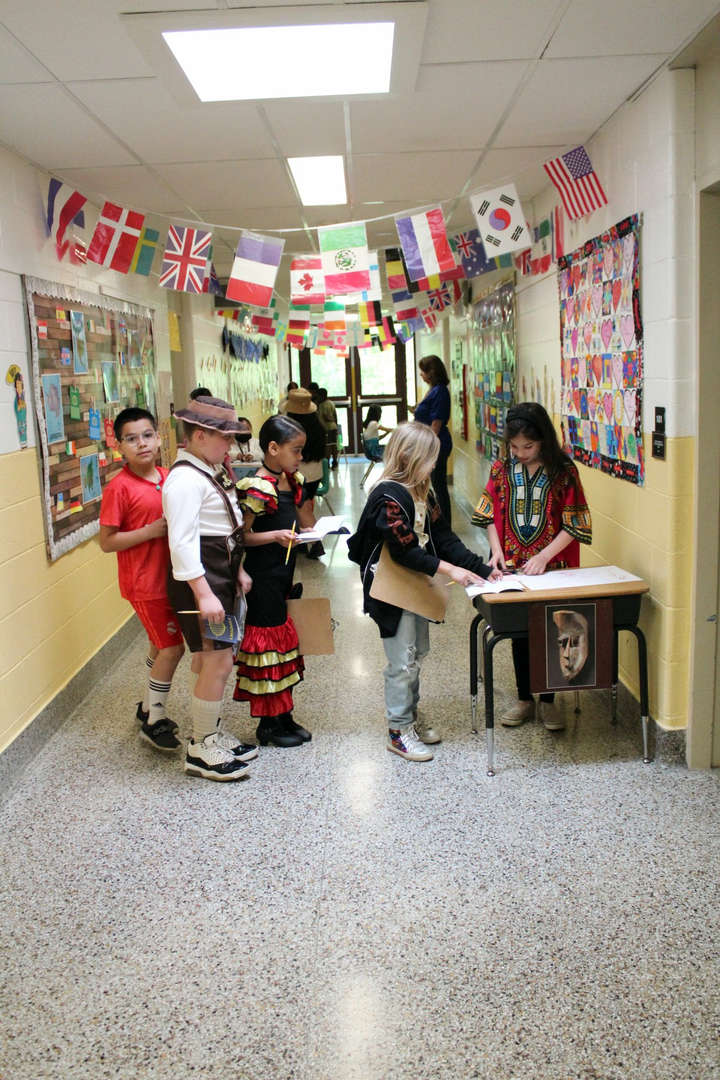 This year, travelers journeyed to South America, Europe, Africa, and Australia where they viewed creative displays and learned facts about the culture, landmarks and people of different countries.

Student Maya Figueroa welcomed travelers to South America and the country of Colombia with her desktop diorama.

“Colombia was assigned to me, and I was happy because my grandpa was born in Colombia,” she said. “I learned that it's a very colorful place.”

Maya has not had the opportunity to visit Colombia yet, but she hopes to one day. For her project, she built a replica of the cable car system in the city of Medellín.

Across the Atlantic Ocean – and the school hallway – travelers arrived at the continent of Africa and its many countries.

Student Guiliana Ponzini informed those who stopped by her desk to see her display of Morocco that “people travel by caravans and camels in the Sahara Desert.”

Continuing eastward, in the Indian Ocean off the coast of East Africa, is a group of islands known as Seychelles. With 115 total islands making up the country, student Logan Pelillo had plenty of options to choose from for the focus of his project. Logan used foam, paint and resin to create a display of La Digue, the third most-populated island in Seychelles, known for its beaches. The cliff and beach scene featured beautiful blue water with bubbles in it – an unplanned but perfect addition thanks to a reaction between the resin used for the water and the foam used for the display’s base.

“I want to visit Seychelles to experience the beauty of the island,” said Logan. He added that he wants to “swim, bike and see all the flora and fauna!”

In the land down under, student Matthew Zombo intrigued travelers with his project on Kangaroo Island, off the coast of mainland Australia.

According to Matthew, Kangaroo Island has a Mediterranean climate with low humidity and mild winters. But, did it get its name because of the large number of kangaroos there?

“I don’t really know, but there are a lot of kangaroos,” he said. “I picked Kangaroo Island because I was watching TV and saw a guy who did a video on kangaroos, and I am really interested in them. They are not my favorite animal, but they are one of my favorites.”

Later in the day, the students took their projects outside the walls of the school to the field where parents and guardians were able to tour the world along with the students. Under the shade of the trees, our community became travel connoisseurs and were able to travel around the world in just 30 minutes thanks to the hard work of our students.